Milwaukee-based artist Mathew Hintz has been a production artist at Harley-Davidson for 20 years, but recently decided to explore a new subject: airplanes. The idea came when a co-worker mentioned the EAA Aviation Museum.

“We actually went two years ago to kind of look at it, and then last year we reached out to EAA, and they invited us up there, gave us a great tour, and we decided to kind of start doing some artwork together,” Mathew said.

Mathew submitted several concepts, and EAA chose a P-40 Warhawk, which will be used for a T-shirt, and a painting commemorating the Apollo program, which will be auctioned off at tonight’s Gathering of Eagles. 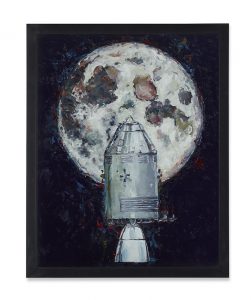 Collaborating with EAA is not entirely new to Mathew, as several years ago he designed pins for the Harley-Davidson Owners Group at EAA AirVenture Oshkosh.

“There was a pin stop, so they would have a motorcycle and a plane on this pin of whatever was significant that year,” Mathew said. “It’s just one of those weird little things that circles back on you.”

In addition to the completed, donated artwork, Mathew hosted a live painting event at AirVenture, which took place Wednesday at the Aviators Club.

“I do this at quite a few events,” he said. “I’d say probably like six events a year I’ll try to do live painting, and it’s really my only outlet to shake hands, to meet people. It’s hard online to get feedback and see what works and what doesn’t work. But honestly, it’s more gratifying to be able to meet people in reality.”

Mathew’s work has an impressionistic style, and he said he primarily paints mechanical or “gas and oil” subjects, but he approaches each painting as if he was about to paint a portrait.

“I look at all of these as kind of like portraits, and if this was a commissioned [painting] … the conversation I always have is, ‘What’s your favorite part of the mechanics of it that also tells almost the whole story of the item or the object,’” he said. “There’s human portraits, and there’s plane portraits, and I would handle it the same way, trying to tell a bigger story and get the personality of it as much as possible in a snapshot.”